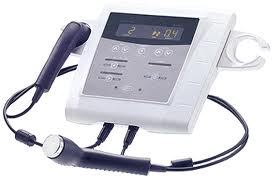 Ultrasound is a mechanical pressure wave or mechanical vibration resonating at a high frequency beyond the upper limit of human hearing. Physiotherapist has been used it Since the 1940s. One of the greatest proposed benefits of ultrasound is that it increases the healing process of certain soft tissue injuries. This therapy is used for reducing pain, muscle spasm, and joint contractures.

The number of times a particle undergoes a complete cycle (compression and rarefaction) in one second.

It is the distance between the two closest points on the waveform in the particular medium.

The velocity of a wave is the speed at which the wave moves through the medium. It varies depending upon the physical nature of the medium.

The Ultrasound instrument consists of a high-frequency generator. This is connected to a Piezoelectric crystal (treatment head or transducer circuit) by a co-axial cable. for the production of ultrasound waves.1 MHz or 3MHz frequency is needed When these varying potential difference or frequency applied on quartz crystal or barium titanate crystal, via a linking electrode, the crystal being fused to the metal front plate of the treatment head.any changes in the shape of crystal(Compressed and Relaxed), produces an ultrasonic wave. it generates ultrasound waves by a Piezoelectric effect.

Piezoelectric effect refers to the application of an electric field to a crystal, which causes a realignment of the internal dipole structure. this realignment results in crystal lengthening or contraction, converting electrical energy into kinetic or mechanical energy. This is how the ultrasound transducer produces sound waves.

Ultrasound follows the laws of optics. If an ultrasonic beam traveling through one medium encounters another medium which will not transmit it, reflection takes place.

Air will not transmit ultrasonic waves, so in ultrasonic treatment great focus to avoid leaving air between the treatment head and patient, to minimize reflection.

However, there will always be some reflection at each interface that the ultrasound beam encounters. this gives rise to the term ACOUSTIC IMPEDANCE(Z)

Acoustic Impedance (Z) – It is the ratio between the reflected and transmitted ultrasound at an interface. If the acoustic impedance is low, the transmission is high and vice versa.

The intensity of ultrasound waves decrease as they travel through tissue, it’s known as attenuation. it is the progressive loss of acoustic power. Two major factors contribute to attenuation absorption and scatter

Ultrasound is absorbed by the tissue and is converted to heat at the point. absorption of ultrasound takes place at a molecular level. the tissues with the higher protein content will absorb the US to a greater extent.

Scattering of ultrasound in the body occurs due to two phenomena, divergence in the far-field and reflection. Especially because of reflection, the ultrasound beam may spread in the body, so that effect can develop not only in the direction of the sound beam but also outside it.
The ultrasonic beam is reduced in intensity the deeper it passes. this gives rise to the expression ‘HALF VALUE DISTANCE’ . which is the depth of soft tissue that reduces the ultrasonic beam to half it’s surface intensity.

Ultrasonic waves are not transmitted by air. some couplant used to improve contact and reduce friction between transducer and skin during ultrasound treatments. example- Aquasonic gel.
Air is wholly unsuitable as a contact medium, because of the almost complete reflection of the ultrasound.

Effects of Ultrasonic Waves on Tissue

When ultrasonic waves are absorbed by the tissues, they generate heat in the tissue. The amount of heat developed depends upon:

In the simplest sense, it relates to the formation of gas-filled voids within the tissue and body fluids as a result of ultrasound vibration. There are two types of cavitation stable and unstable.

Stable cavitation- it is not dangerous and could be beneficial as it causes micro-streaming or Acoustic streaming, where the permeability of cell membranes and the direction of movement of molecules into a cell in influenced.

Unstable cavitation – It is potentially dangerous to the tissue. as the collapse of the bubbles caused a great local rise in temperature. it is avoided by moving the treatment head, using a low intensity and using a high frequency (1 or 3 MHz).

This is the unidirectional movement of a fluid, in an ultrasound field.this is a steady circular flow of cellular fluid. It stimulates cell activity if it occurs at the boundary of the cell membrane. which results in therapeutically advantageous changes needed for repair, such as; increase protein synthesis, increased secretion from the mast cells, fibroblast motility changes and increased uptake of the second messenger calcium.

Standing waves are also called a stationary waves. A combination of two waves moving in the opposite direction, each wave having the same amplitude and frequency. In ultrasound also standing wave occurs, when the reflected wave superimpose on the incident waves.

Standing wave fields can cause transient cavitation and consequently the formation of free radicals, so it’s important to minimize the hazards of it the therapist moves the ultrasound head continuously.

When an ultrasonic beam applies it produce compression-rarefaction of cells, and affect the movement of tissue fluid in interstitial spaces. This can help reduce edema.

Ultrasound accelerates the normal resolution time of the inflammatory process. ultrasound can have a useful effect in all three stages of repair.

Ultrasound increase the fragility of lysosomes membrane and thus enhances the release of their contained enzymes, these enzymes will help to clear the area or debris and the body begins to put new collagen in the area of injury.

Ultrasound increases the tensile strength of the scar by affecting the direction, strength and elasticity of the fibers, which make up the scar.

This method may be used when the treated surface is regular. Then apply the coupling medium between the skin and transducer head to avoid air. Move ultrasound head in circular movement for transmitting the ultrasonic beam to the tissue.

This method may be used When direct contact is not possible due to irregularity of the part or tenderness at the site. this method used on distal parts of the body such as the hand, foot, ankle, etc.