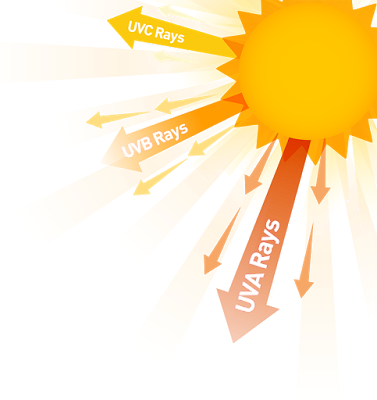 The therapeutic part of the ultra-violet spectrum may be divided into:

UVA and UVB are biotic, where as UVC is abiotic.

The Sun emits a broad spectrum of ultraviolet radiation, including UVA, UVB, UVC. Both UVA and UVB reach the earth from the sun. however, UVC is filtered out by the ozone layer. For therapeutic purposes, some form of generator is used to emits UVR.

A mercury-vapor lamp is a gas-discharge lamp that uses an electric arc through vaporized mercury to produce light. These are used for the production of ultraviolet rays for therapeutic purposes.

For explanation, you may click here – Mercury Vapor Lamp for Production of UV Rays

Absorption of UV Rays in body

UVC is absorbed in the epidermis along with UVB, and UVA may penetrate as far as the capillary loops in the dermis.

Erythema is reddening of the skin as a result of an inflammatory reaction stimulated by ultraviolet rays ⇒ release of histamine like substance ⇒ dilation of the capillaries and arterioles and exudation of fluid into skin.

The Erythema reaction has been used to classify doses of ultra-violet given to patients. there are 4 degrees of erythema E1, E2, E3, and E4.

The resistance of the body to infection is increased as a result of the stimulation of reticuloendothelial system ⇒ antibodies against bacteria and toxins.

Skin response to UVR depends upon:

1) Quantity of UVR energy applied to the skin, which depends upon-

The following skin types are described,  from the most reactive through to the least:

Dosage can be progressed as follows:

Dosage used on open wounds are not progressed because there is no epidermis to thickness.

Alteration of the intensity with distance

To irradiate a smaller area the source is moved nearer to the patient but the time of exposure must be altered to maintain the same intensity under the law of inverse squares.

Therapeutic Effects and Uses of UVR

The therapeutic effects produced and the uses are listed as under:

Ultraviolet radiation is given in E2 doses for acne vulgaris, with the following aim-

Person who work outside in the strong sunshine region, can have reduce effects of sun burn .

Precautions to the Use of UVR